A downloadable game for Windows

Pocket Threads is a turn-based 2D RPG where you capture and battle monsters in a unique world composed of handmade embroidery as a person with a plant pot for a head.  Take up the mantle of Threadmaster and explore the small island, chatting with citizens that might help you on your journey. Collect up to 20 different monsters and take up to 4 with you at a time, with new monsters being added nearly every update.

Play the first game to ever be made with real embroidery!

Font "Kite One" by Eduardo Tunni.

WASD or arrow keys -  Move OR attack in that direction

Previous saves should be compatible with this update.

-Added ability to skip through dialogue (press ‘E’). Works in combat for the most part

-Added the ability to change the speed at which NPCs talk

-Added the ability to catch monsters even if your party is full, sending them to your box

-Fixed a lot of sprites that were looking extra spicy

-Fixed two of the tree sprites

-Added particles that appear when you heal your monsters (temporary texture)

-Made it clearer to see what monster is currently controllable/moving

-Fixed a couple of the monster clustering issues

-Fixed the troublemaking nature of a few monsters

My green pasta with wings is my only source of happiness. Especially after I cook it.

I don't usually play battle games so I don't think I played properly but I love the world you're crafting :D 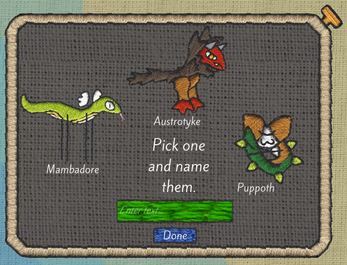 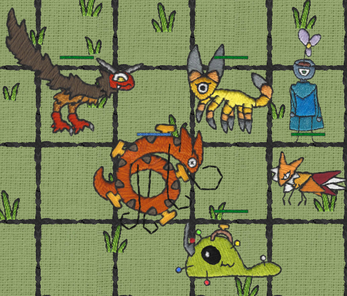